Skip to main content
To provide you with the best experience, Capital O Casa Hamaca uses its own and third-party cookies on its website for technical, analytical and marketing purposes. By continuing to browse our site, you are agreeing to our use of cookies. Please consult our Cookie Notice for more information.

Beds for Brushes an Artist in Residence Program 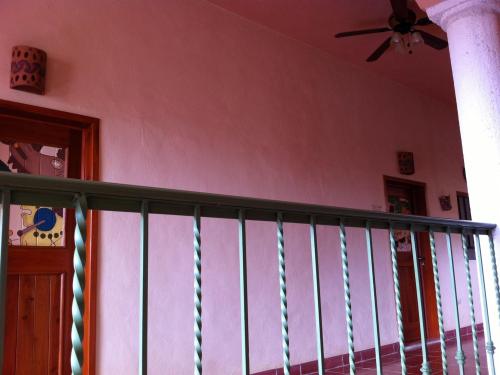 A few years ago a young artist from San Francisco, California, was visiting Casa Hamaca Guesthouse along with his wife. We chatted about art, specifically about murals since there are 15 murals in the casa. After Matt Christensen returned home he wrote me and asked if I would be interested in another mural. I responded "yes" and offered a room for him and his wife along with breakfast and lunch for the duration of the project. 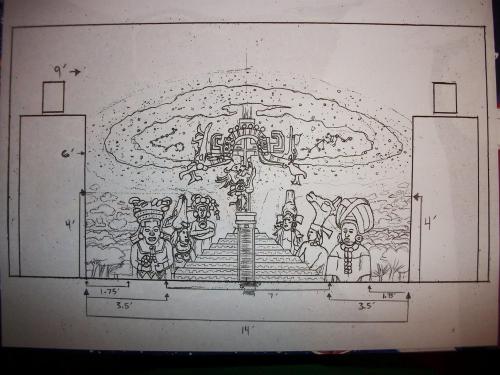 Matt sent me a rough pencil sketch and we went from there. 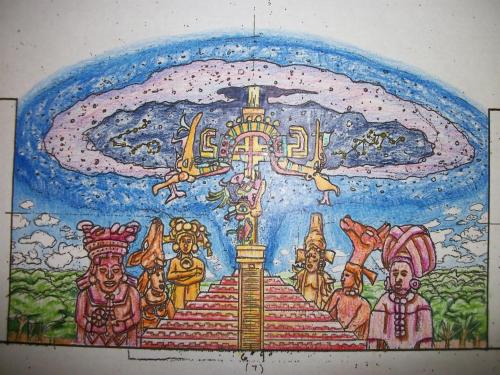 His sketch evolved into a pretty tight full color drawing. He applied for and received a grant which paid for his travel and materials. The main elements of the design were the Milky Way, a Tree of Life, six figures and a pyramid. 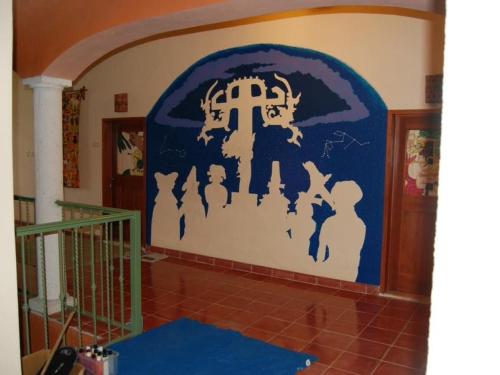 Matt's plan was to work 10 hours a day for ten days. But after the framework of the pural was on the wall, Matt got sick and needed to return home.

The Plan for a Collaborative Mural Began to take Shape

I envisioned nine different artists would each complete a segement of the mural following Matt's design but putting their own spin on it. That would make the finished mural the work of 10 different designers/artists/muralists. 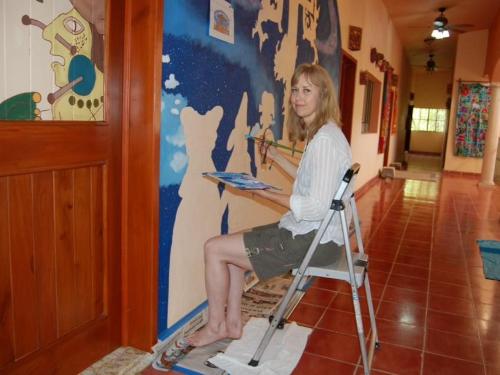 And then, through a chance conversation with some guests from Oregon, I was put in touch with a friend of theirs, Lori Webb also from Oregon, who offered to complete the Milky Way. 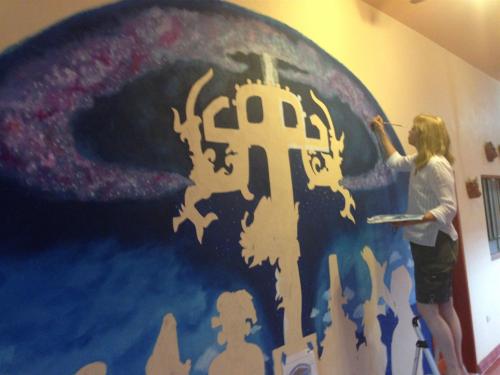 Lori did a lot of research before she came to the Yucatan so she was ready to start work on the sky very quickly. She made some adjustments to the Tree of Life as she completed the sky. 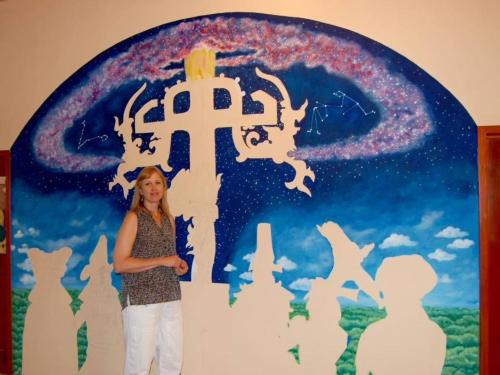 Lori also filled in the forest in the lower part of the mural. And the optimum sequence became clear. Next step would be the Tree of Life and then the six figures and finally, the pyramid. Lori's work stimulated other artists to come forward. 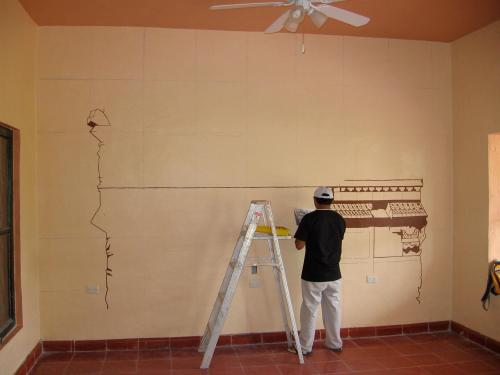 From the first days when I moved into Casa Hamaca Guesthouse, before it was a guesthouse, I wanted murals on the walls. I hired a young man who had some experience sign painting but no experience painting murals. Using PhotoShop I proportioned the selected images to the wall and then grided the image in PhotoShop. Then we snapped blue caulk lines at 50 cm intervals on the walls and told the artist to just fill in the blanks. 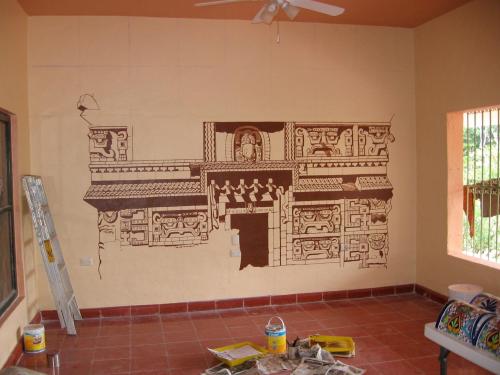 He did a marvelous job. In all he completed four murals on the first floor of the casa. And then told me that mural painting was too much work and that he was going to quit to become a waiter. What a waste of talent! 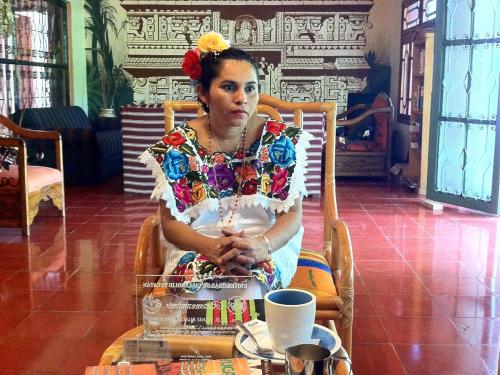 The finished mural is one of the focal points of the reception room. The image is after the original done by Frederick Catherwood, an English artist, about 1841 of a building at Chichen Itza. 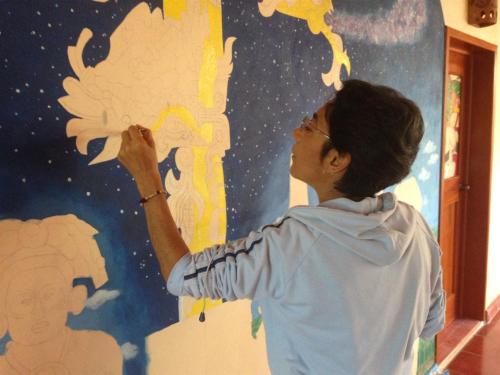 Adriana Zeron Neyra, a Valladolid resident and a student of the Mayan culture took on the task of the Tree of Life...probably the most complicated piece of the mural...and the piece with the most symbolism. 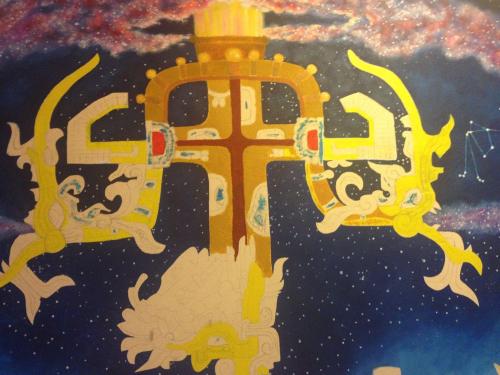 What at first looked like fish turned out to be serpents...serpents of the day and of the night. 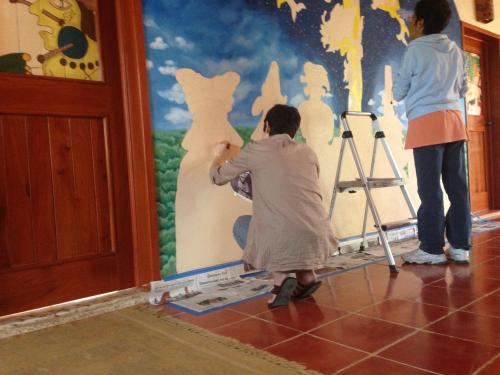 Amy Crandall, yet another artist from Oregon, showed up one day and said she would like to work on the mural and would be in town for a short time. She and Adrianna were painting at the same time. 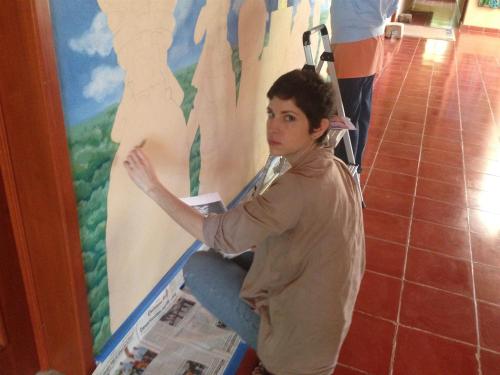 Amy started sketching in the features of her figure. She shares her experience here: http://lacunist.com/painting-past-the-lines/ 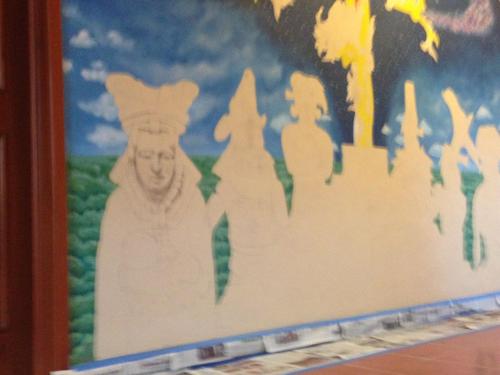 Amy's figure was beginning to take shape when.... 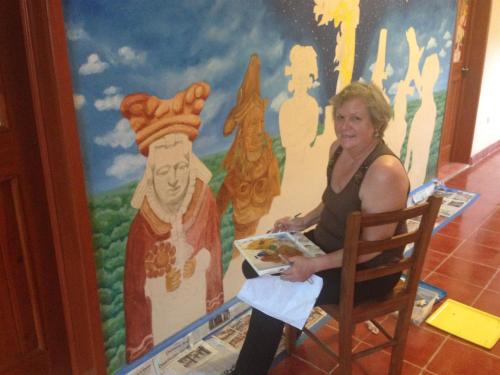 Dee Poland, from Canada and San Inez in the Yucatan, said she had both the time and the interest to work on the mural. So for a short time three artists were working side by side. 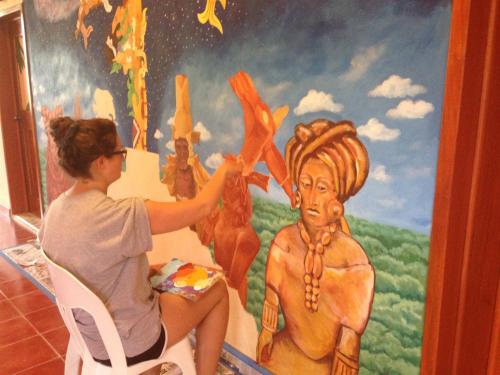 Alison Palmer (http://www.alisonpalmerstudio.com), from Connecticut, was a five-time guest at Casa Hamaca and offered to paint one of the figures. Unfortuanately she painted so fast, I did not get a photo of her at work. The same thing happened with Douglas Filiak, from the USA. His plan was to leave very early in the morning on his way to Belize. He worked all night to complete his image so I have no photos of him working since he was finished and on his way before I got up. Christine Beaudoin, of Canada, finished her figure and then came back to rework some areas of the figure with which she was not satisified. 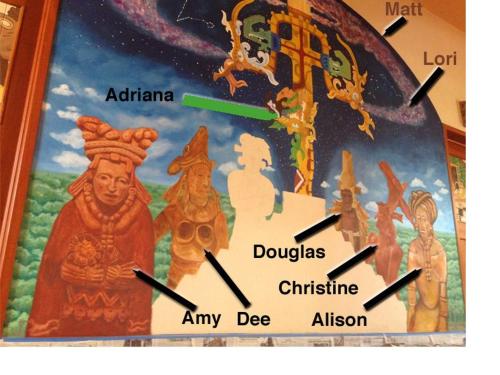 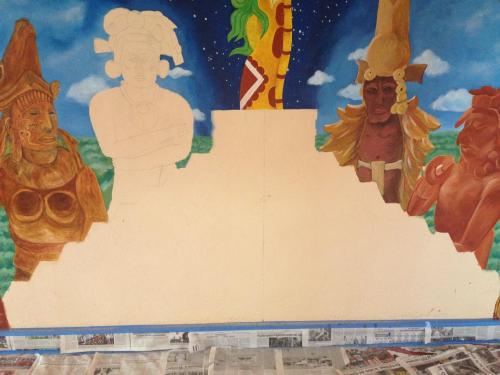 Two blank spots are waiting to be filled. The final figure and a pyramid. Are you up to it? Or do you know someone who is?
Previous
Next